Brundall Local History Group
A timeline of Brundall history will be created here... but first, let's go right back in time.

Digs in Brundall - and their discoveries 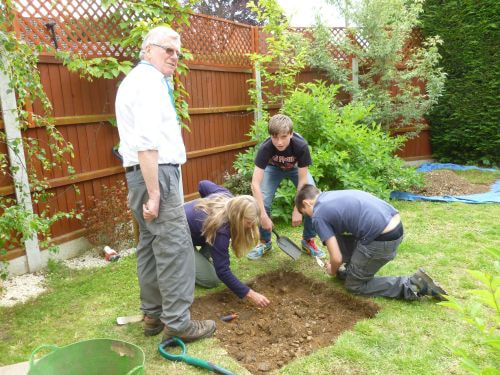 The photo shows the careful start of a pit... the spoil is taken out, washed and recorded and retained for analysis. The pits are dug to one metre deep, ten centimetres at a time.
Between 2015 and 2018 a series of archaeological test pits were run in Brundall by Cambridge University under its community archaeology programme. Up to 30-40 Year 9 schoolchildren from various schools in East Norfolk descended on a number of gardens bravely offered up by Brundall residents to dig one-metre square pits over a 2-day period to see what they could tell us about the history of our village.

The children worked in groups of four in each garden dig. ​They were instructed at the beginning of each session on how to dig so as to keep historical levels intact and record finds accurately. For the sake of the owners, they were then instructed on how to restore pits at the end of the session so that gardens were left intact

For the village, we were given details of all pottery and other types of finds so we know a little more of what our forbears in Brundall were using and where they settled. In 2016 Carenza Lewis of “Time Team” fame, who led the digs, gave a talk for Brundall Local History Group which was exceptionally well-attended. Apart from finds in Brundall specifically, she spoke about the wider project, covering large parts of East Anglia and the evidence appearing that east Norfolk was heavily affected population-wise by the ‘Black Death’ of the 14th century.

The 46 archaeological test pits excavated in Brundall between 2015 and 2018 have yielded archaeological evidence for settlement in the parish dating from the Late Bronze Age through to the modern day.

More about the findings 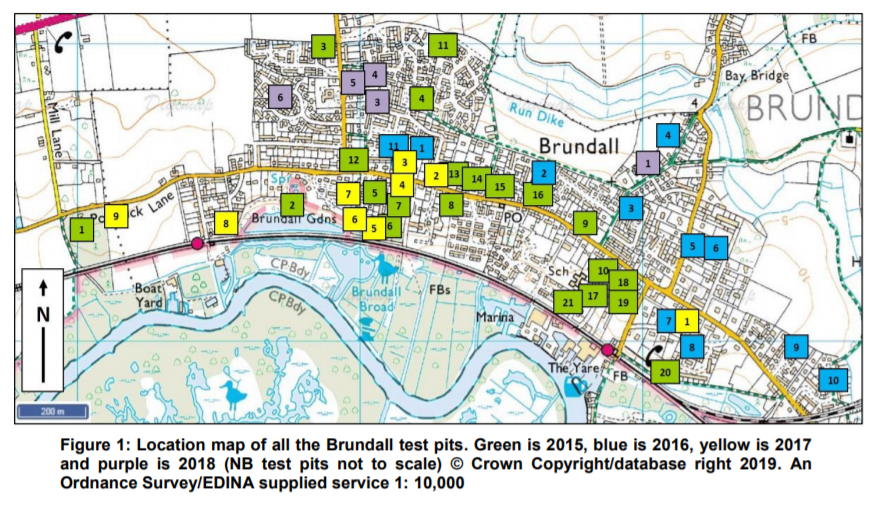 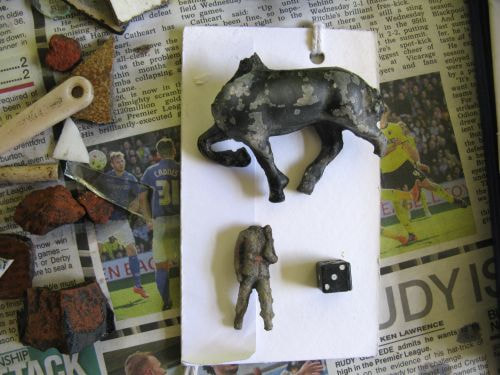 These toys were found in the pit in the Garden Centre at Brundall Home Hardware in Links Avenue.
The earliest evidence for activity in Brundall likely dates to the Bronze Age, although some of the finds may also be Neolithic.
​
Several sherds of Late Bronze Age pottery were excavated from four of the 46 test pits; three of these were at the south end of Chancel Close. This is an area of higher ground, overlooking the River Yare, and with the presence of a multiple burnt stone also recorded from these test pits, it is likely that there was activity here during the Bronze Age. One test pit in the east of the village also recorded a single small sherd of Late Bronze Age pot. This test pit is also just to the south of a probable Bronze Age Barrow to the east of Blofield Road.
The test pitting results do suggest a much more extensive spread of later prehistoric activity than has previously been recorded, with more evidence likely still to be found under the village.

Iron Age activity was limited to a single small sherd of pottery excavated along Blofield Road, and is potentially the first material evidence of this date to be identified from Brundall parish.

A total of four test pits found limited evidence for Romano-British activity in Brundall, including a test pit at either end of the village along Postwick Lane and St Michaels Way. Two test pits in the area around the church on Chancel Close also yielded sherds of Roman pot, and these are the closest Roman material from the test pitting to be found near to the site of a Roman building identified during 19th century excavations at Brundall Gardens. The material associated with this building was extensive and hints that the area close to this saw widespread Romano-British activity, whereas the test pitting only produced limited evidence for additional Romano-British activity elsewhere in Brundall.

The identified Anglo-Saxon activity in Brundall was limited to just one test pit, excavated at Chancel Close and just to the south of the current church, with one sherd of Early Anglo-Saxon hand-made pottery and three sherds of Late Anglo-Saxon Thetford Ware. Some evidence for Anglo-Saxon activity has already been found in the parish, the most significant of which was the discovery of Early Anglo-Saxon cremation urns, likely part of a cemetery, found to the immediate west of Brundall Gardens. It was thought the single sherd of Early Saxon pottery may also have derived from a cremation urn and could hint at the presence of another cemetery here, and so potentially there is evidence, albeit limited, for Early Anglo-Saxon activity either side of the once large area of Roman settlement.
It may have been that this area around St Lawrence’s church was the original core of the village and was why the nearby location of the church was chosen during the 13th century.

The evidence for high medieval activity in Brundall was found to be quite dispersed, with 11 test pits yielding pottery of this date. A prevalence of material was recorded through the ‘central’ area of Brundall, along The Street, which may hint at the earliest origins of the village in this area. Test pitting results suggest that the settlement appears to have been quite severely affected by the socio-economic factors of the 14th century, including the Black Death. It is highly likely that the village experienced a contraction or significant shift in the settlement layout.

Brundall later recovered as a settlement and continued to expand along the linear formation of the village, as seen today, with 26 of the 46 test pits producing pottery of a post medieval date and 40 of the test pits yielding pottery of a 19th century and later date,
Copyright: Nothing on this website may be copied or published without the permission of the Brundall Local History Group. This does not mean we will not give permission, but you do have to ask us. The archive material has come from many sources and there are many copyright holders.